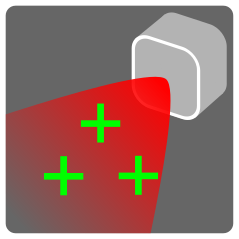 An Open-Source tool for working with lighthouse-based tracking data, including support for the HTC Vive, which is still in the experimental phase.

Most of the development is discussed on Discord. Join the chat and discussion here: https://discordapp.com/invite/7QbCAGS

If you are an individual who bothers going back and watching some of these, PLEASE PLEASE PLEASE add a note to https://github.com/cnlohr/libsurvive/issues/66 whenever something interesting happens. I want to make a highlight reel, but I don't want to sit through all the videos.

Please see the issues for what help needs to be done now!

HackADay article and video with Dr. Yates on how they made the Vive a thing. http://hackaday.com/2016/12/21/alan-yates-why-valves-lighthouse-cant-work/

There are two things you should consider doing to your system before running libsurvive.

(1) Install the udev rules: cp useful_files/81-vive.rules to /etc/udev/rules.d/ and reboot. (2) If you are running on an NVIDIA Card, you will need to AllowHMD to true. Add the following line to your /etc/X11/xorg.conf device section: Option "AllowHMD" "yes"

I say "high-performance" really this project is based tightly off of OSVR-Vive-Libre, but, specifically is an attempt to:

The limiting factor for Vive viability on a given computer is the maximum available pixel clock frequency, and frequency limitations of the HDMI port, and HDMI and DisplayPort video cables. DisplayPort can support higher frequencies than HDMI, on Ivy Bridge HD4000 graphics. In fact, the Vive works with HD4000 graphics using DisplayPort, with native EDID resolution (2160x1200@90Hz).

To support the Vive on HDMI, you either need a newer version of HDMI, or you need to define a custom resolution that respects pixel clock and video port limits, and is also accepted and displayed by the Vive. So far, we have not had success using custom resolutions on linux or on Windows. Windows imposes additional limitations in the form of restriction of WHQL certified drivers forbidden from using custom display resolutions (only allowing those defined by EDID in the monitor). Intel has released uncertified beta drivers for Haswell and newer processors, which should be able to support custom resolutions for the Vive (untested at this time).

The default configuration of libsurvive requires both basestations and both controllers to be active.

Here is an example of a default configuration file that libsurvive will create as config.json in the current working directory when any libsurvive client is executed:

To make libsurvive calibrate and run with one basestation, lighthousecount needs to be changed to 1. You can also pass in -l 1 as command line arguments.

It may be annoying to always require the controllers for calibration. To make libsurvive calibrate by using the HMD, RequiredTrackersForCal needs to be changed to the magic string HMD. The strings for the controllers are WM0 and WM1, short for "Watchman". Other possible values are WW0 (Wired Watchman) for a controller directly connected with USB or TR0 for a Vive tracker directly connected with USB (When connected wirelessly, the tracker uses the dongles, so uses WM0 or WM1).

Lastly, to ensure libsurvive calibrates using the HMD, AllowAllTrackersForCal can be changed to 0.

Here is an example for such an altered config.json file

Running libsurvive's ./test with this config.json in the same directory should now go through the calibration and start printing poses with only the HMD and only one lighthouse basestation active. Enabling and tracking controllers will still work with this configuration.

For best results the HMD should not be moved while calibrating!

The important calibration steps are denoted by libsurvive printing

If libsurvive does not print these steps, make sure that the lighthouse basestation is visible to enough sensors on the HMD.

Sometimes libsurvive goes very quickly through these steps and fills in all pose values as NaN or -NaN. This appears to be a bug in libsurvive that has not be found yet. Reflective surfaces nearby may trigger this problem more often.

Here is a short demo video how successfuly running ./test should look like.

Using libsurvive in your own application

Example code for libsurvive can be found in test.c. calibrate.c may contain some interesting code too.

Here is minimal example that demonstrates using libsurvive's callback functionality to fill in pose data into a user defined data structure that is stored in libsurvive's SurviveContext.

As mentioned, only the pose from lighthouse number 0 is used. Since the callback is called for all tracked devices, so->codename can be used to differentiate between devices like HMD, WM0, etc.

libsurvive has an integrated tool that allows you to record and playback streams from all supported devices. To save off a stream, invoke it as follows:

This gives you a file -- my_playback_file -- with all the device configurations and events file you need to replay it.

You can also just let it stream to standard output, but this tends to be a lot of information.

To actually replay it, put that directory path in the 'playback' configuration value in config.json and run libsurvive as usual. Note that this will purposefully stop the USB devices from loading as to not confuse the library with inconsistent data.

You can also replay it just with command line options:

There is also a config variable -- PlaybackFactor -- which adjusts the speed at which playback happens. A value of 1 emulates the same time the events file took to create, a value of 0 streams the data in as fast as possible.

Nothing will happen until you connect to that page. When you do, the app lifetime will be bound to that session -- reloading the page will reload data_recorder.

The arrow keys will move you to the left / right / up / down and the UI response to orbital mouse controls.

BELOW IS NOT FINALIZED!!!!

1) We are using the right-hand rule.

2) All "poses" should be handled as a SurvivePose, which is effectively a FLT[7], with xyz, wxyz. The first is a positional offset, and the second is the rotation.

3) Though this is not universal, consider using SurvivePose for all situations where a true pose used instead of passing around a FLT or FLT[7].

The idea is you should be able to take a coordinate local to the HMD and then use ApplyPoseToPoint to transform that point into world space, by applying the output of the poser.

5) Defining the value of pose in BaseStationData: This pose will convert something in lighthouse-local space into a position in world space. When calibrating, if you have an object you want to define as 0,0,0... You will need to take its pose and invert it.

6) Posers will take into account the pose of various lighthouses, if NOT in calibration and return poses of objects in world space assuming the lighthoses are set up. 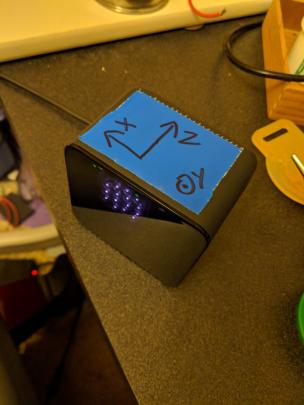 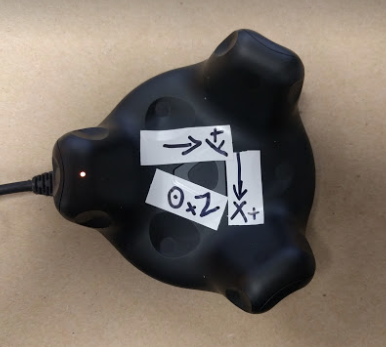 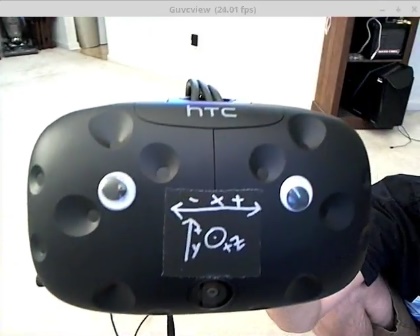 NOTE: This is NOT currently correct.

Thanks to Mr. Faul for our logo! Special thanks to @nairol for an extreme amount of detail in reverse engineering the existing HTC Vive system on his https://github.com/nairol/LighthouseRedox project.